2 Months After Harvey, Houston Has Millions in Donations – But Surprisingly Few Volunteers 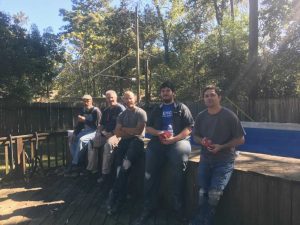 The media and news cycle is pretty much done with Hurricane Harvey by now. Two other hurricanes have hit, there’s the Syrian food crisis, and another Harvey (the Weinstein kind) is making news for victimizing dozens of individuals.

Besides, it’s been two months. Houston is “fixed” by now, isn’t it?

The answer is unfortunately no. This viral picture of a Houston resident watching Game 7 of the World Series last night pretty much sums things up:

It probably won’t even be fully cleaned up by the end of 2018. Thousands of homes are still in disrepair, but people around the U.S. have moved on. Many organizations are still able to tap into the resources donated shortly after the hurricane, but there is one thing they are sorely lacking:

Many unaffected families along the coast are happy to continue the relief work. After all, the disaster is still visible and relevant to them. It’s in their backyards, so to speak. Organizations, including LiveBeyond, are struggling to recruit volunteers from outside the area. Groups are trickling in, but the steady flow of volunteers has ceased. But the work is still getting done.

Our disaster relief coordinator James Woodroof has been down there for weeks with local teams spearheading construction efforts.