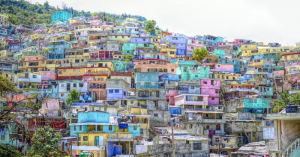 I have the unique privilege to visit the people of Thomazeau, Haiti on a regular basis. Thomazeau is one of the poorest regions in the poorest country in the Western Hemisphere. And yet, as I approach Thanksgiving each year, I ponder over all that I’ve learned from my Haitian brothers and sisters in Christ.

One of my very best friends in Haiti is a middle-aged woman named Sofie. The very first day I met her, she was organizing a group of men to build a rock wall. She was doing this as a volunteer (not for pay), and she was carrying the rocks that most of the men couldn’t lift. To say she is a strong woman is an understatement!

Sofie soon got a job working for LiveBeyond – the nonprofit I also work for. She managed a team of women to clean the house and do laundry for the resident missionaries. Her job could be considered by some to be tedious. She does the same things from week to week with little variation. But Sofie is full of the joy of the LORD. She takes pride in the work that she does. When I lived in Haiti, I loved to hear her sing as she went about her daily duties. I sometimes joined her. Sofie was not able to go to school as a child. Since I am a teacher by trade, she asked me to teach her to read and write. My favorite memory of Sofie was helping her sign the certificate of her baptism – the joy on her face expressed her gratitude far more than any words ever could.

When I feel myself wanting to complain and starting to feel ungrateful, I try to emulate Sofie. I sing the songs that she taught me, and I attempt to imitate her joyful and thankful attitude. I look to her as a spiritual mentor – a pillar of strength who finds much to appreciate even in a sometimes-difficult environment. And I know that the power that sustains her is the joy of the LORD.

Finding Joy In the Face of Hardship

One of my other good friends in Haiti took years to make the decision to accept Jesus as her savior. She seemed to really want to be a Christian, tears of repentance streaming down her face at nearly every church service – but we couldn’t figure out why she hadn’t committed yet. Rumors circulated that she was a local prostitute. Pretty regularly, one of us would ask her if she wanted to get baptized, and she always answered “poko, poko” meaning “not yet, not yet.”

The day finally came when she decided to be baptized. When people are baptized in Haiti, it is customary for them to share their testimony about how they came to Christ. As she began to give her testimony we learned that she was not just a regular, run-of-the-mill prostitute. She was a temple prostitute at the local voodoo peristyle. Her services were a regular part of the cult worship of spirits!

The day before, she told the man she was enslaved to at the peristyle that she was leaving the prostitution business, and leaving voodoo for good. He was outraged. He told her he would kill her. Her conversion to Christianity meant that he would be losing a major source of profit. And yet, as she stood before the church telling us about the sins of her past, there was a lightness in her eyes that wasn’t there before – a relief at finally casting her burden onto Jesus’ shoulders and taking Him as her own.

Accepting Jesus was a mortal risk for her. But she was so grateful to be welcomed into the community of love and fellowship with her fellow Christians – even if that meant dying for her faith as soon as she left the church building. I still see this joy in her each time I go to Haiti. Thankfully, the voodoo priest decided to spare her. She sits near the front in our daily chapel services, and she sings and prays with all of her might. Her faith is real and powerful. I will never know the sacrifice that she made for her faith. When I start to feel that life is unfair because of some hardship I must face, I remind myself of the joy my Haitian friend exuded when she was facing the hardship of becoming a Christian.

Remembering the Gratitude of an Impoverished Woman

There is an elderly woman, Regina*, who lives in a remote village near the Haitian base for LiveBeyond. She and her family are very poor. She lives in a tiny hut that has often been ravaged by hurricanes and heavy rains. I think she has had to rebuild or significantly repair it at least 3 times in the few years that I’ve known her. She lives with some of her children and grandchildren as well as her husband – a local voodoo priest. She is and has always been a very kind woman who welcomes anyone and everyone with LiveBeyond into her home – even as her husband runs for the hills to escape us!

One day, a few years before we had begun construction on our own hospital to serve the area, we were running a medical clinic out of an open-air pavilion. It was a particularly hectic day – we had families pushing and shoving for their place in line, and children sneaking their way past temporary barriers for the coveted “piwili yo” – lollipops.

About mid-afternoon – just when most of the volunteers were hitting the point of fatigue – a motorcycle came speeding up. Ever security conscious, my husband went over to investigate. The driver of the motorcycle looked very nervous, and a young woman sitting on the back was obviously pregnant and in enormous pain. We quickly sectioned off a portion of the pavilion with bed sheets, so that my father-in-law, Dr. David Vanderpool, a trauma surgeon by trade, could examine her. I assisted with the exam, and my mouth nearly fell to the floor with what I saw.

This poor mother was having a late-term miscarriage. I will spare you the details, but this miscarried baby was already unfortunately deceased and it was stuck. Without intervention, this mother would die with her child. Dr. Vanderpool and my husband jumped into action. They got the mother into the back seat of a truck and sped off towards the closest hospital – only a few miles distance, but a 2 ½ hour drive on the rocky, unpaved roads. They were racing the clock for the mother’s life.

When they made it to the nearest hospital in the town of Mirebalais, it was pouring down rain. Dr. Vanderpool had called his friends at that hospital on the drive, alerting them of the situation. They carried the woman on a military cot into the hospital where doctors were barely able to save her life. This incident only confirmed our plans to build a hospital on the LiveBeyond base with a fully-operational surgical and obstetrics ward. The woman stayed at the hospital overnight, so after checking on her one last time after surgery, Dr. Vanderpool and my husband David headed back home.

The next day we began clinic as usual. Early in the day, we noticed that Regina was at the clinic. My mother-in-law offered to see her for medical care but she politely declined. She sat there waiting patiently – but for what? All day long she waited, despite our constant barrage of questions. When we were finally packing up for the evening, Regina approached my in-laws. She didn’t want money or medicine or a job or anything. She simply wanted to properly express her thanks for taking care of the young woman – who happened to be her daughter.

She knew that her grandchildren would be motherless if we hadn’t been able to take her daughter to the hospital because her family didn’t have the money to take her the whole way via tap-tap (taxi service). She knew that we had been able to offer something in that moment that she could never repay. So she did the one thing she knew she could do – she kindly and generously expressed her deepest thanks.

None of us wanted or even expected gratitude from anyone for what happened. Dr. Vanderpool was just doing what he was trained to do. But Regina’s gesture meant more to all of us than we can express. I still think of that every time I see Regina…and every time I see her daughter with her children. Thankfully she has since delivered two healthy babies with no complications through our Maternal Health program. I am often reminded of Regina’s efforts to express her gratitude, and it encourages me to make sure I tell others how much I appreciate them whenever I have the opportunity.

Hurricane Harvey ravaged through so much of south Texas, leaving destruction and terror in its wake. The loss of what people went through was tremendous. I’m still wrapping my mind around what I saw in the weeks following the disaster. I was on demolition teams that tore moldy drywall from destroyed homes. And our hours of toil brought relief for just one family – out of millions affected by the hurricane.

Dr. Vanderpool and his wife Laurie shared what was happening back home in Texas with the Haitians gathered in church the following Sunday. They told them that some of the Americans who came down to Haiti to help in the medical clinic were among those affected. They asked the Haitian people in the church to pray for their friends in Houston. But the Haitians did something that they didn’t expect.

They offered money. The people that work for LiveBeyond in Haiti raised over $1,000 to give to Hurricane Harvey relief. They gave out of their paychecks. They volunteered to work extra hours and donate that money to the cause. They even asked around their neighborhoods to see if anyone else wanted to send a donation. People from the poorest country in the Western Hemisphere voluntarily gave money to people in the richest country in the Western Hemisphere.

Just to give you some perspective: In Haiti, the minimum wage is set at approximately $3.13 per day (225 Haitian Gourdes). In the US, the minimum wage is $7.25 an hour. $1000 is more than the average Haitian makes in a year. And yet many of them said that they wanted to give because they cared about the American friends who visited them on mission trips, and they remembered the overwhelmingly kind American response to the 2010 earthquake in Haiti that killed about 300,000 people.

Their gratitude became their generosity. The Haitian people have so much more to teach me about gratitude, and I am glad I have these stories to remind myself of when I start to feel an ungrateful attitude coming on. I am so thankful for every opportunity to share these experiences with others, and I pray it helps you to become more thankful and grateful for the blessings in your life, as well.

Devin Vanderpool is the Director of Communications for LiveBeyond, a non-profit humanitarian organization founded by David & Laurie Vanderpool in 2005 dedicated to providing clean water, medical care and adequate nutrition to the poorest of the poor. To learn more about how LiveBeyond is transforming lives in Thomazeau, Haiti,