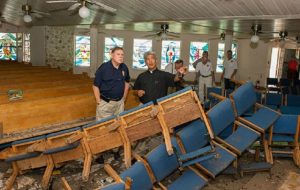 Thirteen churches that were all but destroyed by the disastrous hurricanes this past summer and fall will receive thousands of dollars from the nation’s largest Catholic fraternal organization to help them get back on their feet following the costly devastation caused by the natural disasters.

The Connecticut-based Knights of Columbus has donated $1.4 million to benefit Catholic churches in Texas, Florida and the U.S. Virgin Islands that have been left behind amid relief efforts in the wake of Hurricanes Harvey and Irma that hit in August and September.

“We all saw the pictures and the TV shots of what happened there. The sad thing is that two or three months later, they are still suffering,” Kevin Shinkle, the Knights’ chief communications officer, told The Christian Post. “They are suffering to a large extent, churches in particular. A lot of the focus has been on rebuilding homes and businesses but churches often get left by the wayside.”

The Knights, which has 1.9 million members nationwide, granted donations to seven churches in Texas.

Our Lady of Victory Cathedral in Victoria received $150,000, while St. Francis of Assisi Catholic Church in Houston and the Shrine of the True Cross in Dickinson both received $125,000.

The Basilica of St. Mary Star and the Sea in Key West received $120,000 and Missionary Sisters of the Immaculate Heart of Mary in Frederiksted, St. Croix, received $100,000.

The church that received the most funding from the Knights of Columbus was St. Peter Catholic Church in Big Pine Key of Florida, which received a $360,000 donation.

“It was one of the most damaged churches in the Keys and one that needed the most help,” Shinkle explained.

“These churches were all but destroyed, many of them,” Shinkle continued, adding that the donations were going toward things like roofing. walls and flooring.

In an interview with CP, Knights of Columbus’ Joseph Cullen recalled the emotion that ran through the congregants in Houston when they found out they would be receiving a large donation to help repair their church.

“When one of our guys told them that we would give them $100,000, he said that people just wept openly because they knew their faith community was going to stay and that parish was going to get through this,” Cullen said. “It won’t cover all their costs but that is an amount they can work with.”

“People need their places for spirituality and community gathering and worship,” Cullen continued. “When that building is threatened. It threatens the Catholic community.”

According to a press release, the Knights of Columbus have also earmarked a “significant amount of money” for upcoming repairs on churches in Puerto Rico damaged by Hurricane Maria. The Knights had earlier donated $100,000 to the Archdiocese of San Juan and provided generators, food, water and other aid supplies in the immediate aftermath of the hurricane.

The Knights of Columbus, which has raised over $3.8 million for disaster relief efforts since September, also provided over $720,000 that was used to pay for food, water and other supplies in the aftermath of this year’s hurricanes.

The Knights are also accepting donations as they continue to help struggling communities throughout the world — whether it’s in Texas, Florida or in the Middle East. The Knights raised over $177.5 million in donations in 2016.

The money provided by the Knights of Columbus to damaged churches comes as the Federal Emergency Management Agency has been sued by churches and other houses of worship over a rule that prevents houses of worship from receiving disaster relief grants.

Although the hurricanes happened in August and September, there are still many residents of these impacted areas looking for assistance in repairing and rebuilding their homes and businesses.

Relief agencies are still in need of volunteers to help them restore the lives of the thousands of hurricane victims.

While larger faith-based relief groups like Samaritan’s Purse are on the ground in places like Texas and Florida, smaller organizations are also on the ground and helping repair homes.

For example, LiveBeyond, a Christ-centered relief agency based in Haiti, is supporting efforts in Southeast Texas.

“We are finding a lot of people down here who are needing help,” LiveBeyond’s James Woodroof told CP in a phone interview from the Houston area. “They are not getting a lot of relief. FEMA is helping out a little bit. They are providing money for people to go stay in different places but a lot of people down here who didn’t have insurance. A lot of places were hit that didn’t expect to get any flooding.”

LiveBeyond has partnered with Grace Crossing Church in Conroe, Texas, to coordinate contractors and volunteers from other parts of the country — such as Arkansas and Louisiana — looking to help Hurricane Harvey victims repair their flooded homes.

“We are looking for skilled people but we are also looking for unskilled people. We just need a lot of people to come down and help. We have got the job set up. We got the supplies but we can only move as fast as the amount of workers that we have.”

LiveBeyond and their volunteers have worked about dozen houses. They helped rebuild the home of Becky Williams, who is part of the Grace Crossing Church community.

“It seemed like so long ago, August, is when it happened. But there is no way we would be this far along with our home if it wasn’t for LiveBeyond and our Grace Crossings Church family and all the churches in the nation that have helped and sent money and volunteers who have come from all across the nation,” Williams told CP. “It gets to be out of people’s mind after a while, but there are still people coming to help. It’s even out of people’s minds down here unless you are involved with it. it’s out of sight, out of mind.”

“There are people who are still in tents that have not begun to get back in their house,” Williams added. “But every weekend, I am just impressed because there is somebody new and some people stay through the week and are using up some of their vacation time.”