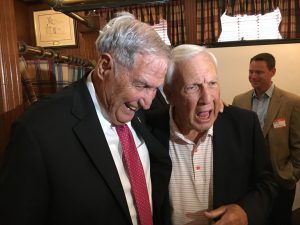 “You can’t imagine how poor people are in Haiti,” said Stallings, who has been to Haiti twice.

Despite two recent strokes followed by a heart attack, Stallings insisted on speaking at the fundraising luncheon Thursday at The Bright Star in Bessemer. Dye insisted on being there with him.

“What he’s done for the state of Alabama and the charities he works for is absolutely amazing,” Dye said.

Dye said that he didn’t like facing Stallings on the field, but loves spending time with him off the field. “I don’t hold it against him that he whipped my ass three times,” Dye said. “I didn’t like it at the time.”
Dye, 77, was coach at Auburn for 12 seasons, from 1981 to 1992, and athletic director for 10 years. Stallings, 82, served as Alabama’s football coach from 1990 to 1996, and his Crimson Tide beat the Miami Hurricanes in the 1993 Sugar Bowl, capping a 13-0 1992 season to win a national championship.
LiveBeyond is a non-profit working to provide health care, clean water and education to people in Thomazeau, Haiti. It was founded by Stallings’ daughter, Laurie Vanderpool, and her husband, Dr. David Vanderpool, a trauma surgeon who quit his medical practice in Nashville five years ago so the couple could move to Haiti.

“Laurie and David have made a difference in that part of the world,” Stallings said.

Vanderpool runs a clinic that treats 12,000 patients a month in Haiti.

LiveBeyond feeds 36,000 people a month and hopes to expand to 100,000 a month, he said. Many of the people who come for help are starving to death, Vanderpool said. LiveBeyond also purifies 240 million gallons of water every month, enough for 200,000 people, he said.

They run a school for 250 children and will soon open another for 250 more children, he said.

The project closest to Stallings’ heart is Johnny’s House, a residence being built for handicapped children in Haiti. It’s named for John Mark Stallings, the coach’s son who was born with Down Syndrome and died in 2008.

“We are going to build Johnny’s House,” Stallings said. “My pride and joy was Johnny. What a joy he was. Dying doesn’t bother me because I know I’m going to get to spend some time with Johnny.”

Laurie said she was three when her brother John Mark was born. “The most important thing to me was to be close to Johnny,” she said. “He set the tone for our family with his sweet, happy spirit. He always centered us into kindness.”

That’s why she began calling the handicapped children of Haiti Johnny’s Kids. “Kindness is a fruit of the Holy Spirit,” she said. “It’s what we always had from Johnny.”

The ministry to the handicapped children in Haiti has rescued them from desolate circumstances and brought them education and opportunity, she said.

“I’m so proud of those kids I want to crow,” she said. “We take these children out of absolute, destitute poverty.”

The Vanderpools have done medical missions around the world, but after the 2010 earthquake that devastated Haiti, they said they had never seen a more desperate need and decided to focus their work there.

When Stallings made his first trip to Haiti, his daughter told him he couldn’t wear red. Only voodoo priests wear red in Haiti, she told him.

“They have baptized more than 350 people in the name of Christ in a voodoo atmosphere,” Stallings said.

The voodoo priests are opposed to her work, Laurie said. “We have a lot of people who oppose our work,” she said. She said that once when she was confronted by a voodoo priest, she told him about her father.

“I grew up with the most intimidating man in town,” she said. “You don’t scare me.”

Stallings said he plans to attend Saturday night’s commemoration of the 1992 Crimson Tide national championship team. The school is honoring the 25th anniversary of the national title earned with the Sugar Bowl upset of No. 1 Miami.

“I want to see my players,” Stallings said.

Alabama hosts Arkansas on Saturday at 6:15 p.m. at Bryant-Denny Stadium in Tuscaloosa.

“I have no more business traveling than the man in the moon,” Stallings said in an interview with AL.com. But he explained why he’s here despite still recovering from serious health issues.

“All my life I’ve honored my obligations,” he said. “I’d rather be a man who had a little courage and did what he was supposed to and died, rather than being a coward and living. So I’ve just done the best I could.”

During the luncheon, Stallings recited “The Dash” poem by Linda Ellis, which is about the dash between a person’s birth and death dates on a tombstone, representing what a person does in his or her lifetime. “But what mattered most was the dash between those years. For that dash represents all the time they spent alive on earth.”

His daughter said that her father has asked that it be read at his funeral, but she was glad he was there to recite it himself again.