Have You Turned a Blind Eye One Year After This Storm Made Headlines? 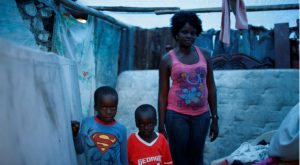 One year ago today, on Oct. 4, 2016, Hurricane Matthew hit Haiti, resulting in almost $2 billion U.S. worth of damage and the deaths of an estimated 546 people. This year, America has seen the devastating effects of Hurricane Harvey and Hurricane Irma along our coast. Then, Hurricane Maria devastated multiple Caribbean Island nations, including Puerto Rico. Lives have been lost, homes destroyed, plans ruined. But how much harder is it for people just an hour and a half flight off of our border to prepare for a hurricane like Matthew? Here’s a look at how a Haitian family might prepare for a hurricane or a similar natural disaster and what the effects of that storm might be in the short and long term.

Many Haitians would find out about hurricanes like Hurricane Matthew from the radio or word of mouth. Hurricane Matthew was not originally predicted to hit Haiti as hard, so many people would not have known to prepare for such a catastrophic storm. But those that did know to prepare would have been sure first to tie up any livestock they owned in their yards or on higher ground. Depending on the location of a family’s house, a family facing a hurricane might even evacuate to higher ground with their livestock. Those fortunate enough to have a tin roof would have to put tires on their roofs to prevent them from flying away. Families would try to waterproof their houses as well as possible, using any materials available. Any perishable food items would be eaten or sold as quickly as possible to prevent loss. Crops like banana plants or coconut trees would be braced for the high winds. School is often canceled during hurricanes, so children would be home, missing out on their education, helping their families prepare in any way possible. And when all preparations were made, they would do what any of us do when facing an approaching storm: wait.

When Hurricane Matthew hit, many families ended up evacuating during the storm due to flash flooding. Since all flood water is considered black water, this put any expectant mothers wading through contaminated water at risk for premature delivery, causing even higher infant mortality rates. Cholera also spread during this time because of the contaminated water. Even mosquito-borne diseases like Zika, malaria, chikungunya or dengue fever would increase in the aftermath of a hurricane like Matthew because standing pools of water would allow mosquitoes to breed in areas they wouldn’t normally affect. Small farms were wiped out across the country. And can you imagine what type of escape anyone with a physical or mental handicap would be able to make in the face of a storm? On the mountainsides, flash flooding and mudslides would claim the lives of anything in their path.

The Week Following the Hurricane

As the flood waters of Hurricane Matthew receded and the rains cleared from the skies, Haitian families investigated their losses. Because the country’s government faces widespread corruption and ineffectiveness, looting would be a huge problem in hurricane aftermath. Families would form alliances or even be forced to pay bribes to avoid attacks from local gangs. Food prices would spike as inadequate food resources become even more unstable. Home repair would be costly and challenging, regardless of one’s station in life, as construction materials in Haiti are scarce. Some children would inevitably lose the ability to go to school as costs of repair and recovery would eat up any tuition money the family had put aside. Some families might even sell their children as restaviks, or house slaves, to other families to gain some form of income.

The Year Following the Hurricane

Many Haitian families would still be facing harsh odds in the aftermath of a hurricane even a year later. Children under 5 years of age, the disabled and the elderly would be at the highest risk for death caused by starvation during that year. Anyone in need of regular medical care would face terrible odds. If children were able to return to school, they would probably have huge gaps in education. Farmers would lose, not only that season’s crop as it molds in the fields, but also the future of their farms. Many Haitians rely on loans, so with no way to pay back anything they owed, they might not have the money to replant, particularly if they are renting their field. Because so many Haitian families depend on remittances from family members outside of Haiti, pleas for money to keep families afloat would be heard across the Americas.

Haiti is still not what you would consider “recovered” from Hurricane Matthew, even a year later. Many Haitians are still dealing with food shortages, unemployment and little access to health care. And this is a country that has nothing like FEMA to help them get back on their feet.

So, the next time you hear of hurricanes headed toward the U.S., please remember our friends on the islands in the Caribbean like Haiti. They face the same amount of damage, or sometimes more, and they do not have the infrastructure we have in the States to relieve any of the problems.

That’s why LiveBeyond is still reaching out to the Thomazeau community through food distribution programs, medical care and the Kè Pou Timoun program, an education and nutrition program for children. The acute issues may be over, but so many families still face poor odds in Hurricane Matthew’s aftermath. It is our goal to relieve the oppression caused by natural and human-made disasters so that the Haitian people can live more stable, healthy lives.

Devin Vanderpool is the Director of Communications for LiveBeyond. To find out how you can partner with LiveBeyond or donate to their relief efforts, visit

New Year Discounts On Book Bundles & Gifts: Click Here to view all our bundles and save up to 72%! Prayer, Holy Spirit, Anointing, the Supernatural and more.
Go Deeper with God in a FREE eCourse: Click Here to view all eight of our free courses. Topics include Fear, Forgiveness, Holy Spirit, Supernatural, and How to Hear God.
Anointed Woman Of God: Rise up and enter the anointing of Deborah, Anna, Esther, Ruth and Hannah. You were called to go higher. Click Here to learn more.
Never Stop Praying – Prayer Changes Everything! John Eckhardt’s prayer bundle gives you six powerful books to help you pray and change any situation. Click Here.
New Year – New You – Bible Sale!: Click Here to save up to 50% off a great selection of Bibles. Plus, get a free gift with each order!
Subscription Special: Subscribe to Charisma for two years for Only $29.97 and get two free gifts. Gift #1 The Harbinger. Gift #2 The Harbinger II. Both books are by New York Times Best-Selling author Jonathan Cahn.

The Maternal Health Program: A Call to Live Life Like Jesus

A Moment to Pray for Haiti

Johnny’s Kids: A Legacy Carried Out Through God’s Work