How One Ordinary Woman Overcame the Murderous Threats of Vodou Priests 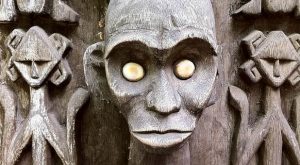 When I was a senior in high school, the superlative I received was, “Most Likely to Punch a Vodou (Haitian Voodoo) Priest.” While not the most flattering accolade—and I by no means resort to violence—it turned out to be quite foreshadowing of what was ahead for me.

The summer before my senior year in college, I was in Haiti helping my parents with their nonprofit, LiveBeyond, while trying to figure out how I was going to fulfill my dream of being a missionary. Then one night while talking to a girl I was discipling, God gave me a vision. In it, I was walking with Loubens, a man who worked for LiveBeyond, and another, unfamiliar, man around a bend in the road. Our purpose was to share the gospel with vodou priests.

Vodou, an openly Satanic religion, is the national religion in Haiti. The practitioners invite demons to possess them; they make sacrifices; they curse, poison and kill their enemies. Vodou priests are highly respected and hold the most power in villages. They are the ones you go to when you want to dispose of someone. So naturally, the idea of sharing the gospel with them terrified me—but I knew I couldn’t ignore it.

That following Monday, I worked up the courage to act on my vision, and without hesitation, Loubens agreed to join me, even though it would put him and his family in danger. We went to the first peristyle—the vodou temple—and shared the gospel and prayed with the priest. Pleased with how it went, we made our way to the next one. When we got there, we found a vodou priest and two men playing cards outside. As I walked up to greet them, the priest, Monsieur Mondeze, wouldn’t even acknowledge me. I tried asking questions but they continued ignoring me, so I sat down and started preaching.

Eventually, something I said warranted a response from Mondeze. He said that he worshiped Satan because he provides him money, clothes and the ability to send his children to school. I tried to tell him the truth but he became more unwilling to hear what I had to say. Before heading back home we prayed for the men and though Mondezi didn’t respond to my message I felt encouraged that the other men were interested in the Gospel.

The next afternoon Loubens and I set out again, but this time as we were walking toward the gate, Pastor Sargesse, a man who had just begun working for LiveBeyond, joined us. As we came around a bend in the road, I realized this was the vision the Lord had given me—this was my calling! Over the next six weeks, the three of us would continue to visit peristyles and priest Mondeze. Every time we shared the gospel with him, he rejected Christ. However, I wouldn’t give up.

A year later I was in Haiti full-time, sharing the gospel with anyone who would listen. One day, Pastor Sargesse told me that the priest Mondeze was sick. We decided to go visit, hopeful that this was the day that he would accept Jesus. Stepping inside the peristyle I immediately felt an evil, oppressive weight. When I talked to Mondeze, he was open to hearing what I had to say. He said he knew Jesus was real, but still didn’t want anything to do with Christianity. I was brokenhearted, but as we prepared to leave, Mondeze agreed to let me pray over him. In addition to asking for his healing, I prayed that all the evil and demonic spirits in the peristyle would be cast out.

Mondeze died less than a week later, and since I was the last person to see him, everyone thought I had killed him. I didn’t understand why until I discovered Mondeze was the king of the vodou priests in our region—and the most feared. Typically after a vodou priest dies, another one takes his peristyle; Mondeze’s was highly coveted, however every priest who tried to perform a sacrifice there failed because there weren’t any spirits or demons present.

This caused a lot of anger and led to a bounty being put out for me. Vodou priests in the area wanted to kidnap me, so I agreed to lay low for a while. After a few days, my dad and I agreed after reading 2 Timothy 3:12 that to live a godly life, I needed to trust the Lord to direct my steps, even if that meant into persecution.

So that day, Pastor Sargesse and I went out into the villages, and as we rounded that same bend from my vision, I looked up and saw 20 members of the local gang waiting for me. As I realized their intention, I started praying. I heard the Lord say, “Heap burning coals on their heads.” When He said this I immediately ran to embrace the men, kissing their cheeks, blessing them and calling them my brothers. Afterward, they all looked at me, shook their heads and walked away.

Today, Mondeze’s peristyle continues to sit empty. There are many priests who won’t allow me in their peristyle and others who want me dead since hundreds of people have stopped practicing vodou and now follow Christ. As I learned from my time with Mondeze, I cannot let fear stop me from sharing God’s love, not when it’s what I was called to do.

Jacklyn Vanderpool is the trip coordinator and spiritual life program coordinator for for LiveBeyond, a nonprofit humanitarian organization founded by David & Laurie Vanderpool in 2005 dedicated to providing clean water, medical care and adequate nutrition to the poorest of the poor. To learn more about how LiveBeyond is transforming lives in Thomazeau, Haiti, see livebeyond.org/blog.

Get Charisma’s best content delivered right to your inbox! Never miss a big news story again. to subscribe to the Charisma News newsletter.

New Year Discounts On Book Bundles & Gifts: our bundles and save up to 72%! Prayer, Holy Spirit, Anointing, the Supernatural and more.
Go Deeper with God in a FREE eCourse: eight of our free courses. Topics include Fear, Forgiveness, Holy Spirit, Supernatural, and How to Hear God.
Anointed Woman Of God: Rise up and enter the anointing of Deborah, Anna, Esther, Ruth and Hannah. You were called to go higher. to learn more.
Never Stop Praying – Prayer Changes Everything! John Eckhardt’s prayer bundle gives you six powerful books to help you pray and change any situation.
New Year – New You – Bible Sale!: to save up to 50% off a great selection of Bibles. Plus, get a free gift with each order!
Subscription Special: Subscribe to Charisma for two years for Only $29.97 and get two free gifts. Gift #1 The Harbinger. Gift #2 The Harbinger II. Both books are by New York Times Best-Selling author Jonathan Cahn.