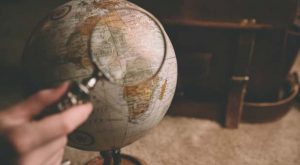 I’m coming up on my two-year anniversary of living full-time in Haiti, and I frequently get asked this question: “How did you know you were called to the mission field?” And it is almost always followed up with, “How did you prepare to go?”

I usually tell them I felt like it was God’s calling over me and that He prepared me for a series of several years. Every word of that is true, but sometimes it seems like it isn’t the answer people want. I know so many people that feel as though they have been called to the mission field but don’t feel like they are equipped or have the gifts and talents to be effective.

Then I was reading Exodus 31 a few days ago, and I felt like the Lord was teaching me something really powerful in response to those questions.

“Now the Lord spoke to Moses, saying: See, I have called by name Bezalel the son of Uri, the son of Hur, of the tribe of Judah. I have filled him with the Spirit of God in wisdom, in understanding, in knowledge, and in all manner of craftsmanship to devise artistic works for work with gold, with silver, and with bronze”

Let’s break this down quickly.

First off, God knows your name. The Creator of the universe, the King of kings, and the Lord of lords knows your name. You are such a delight to Him that He not only took the time to perfectly form you but to know you too!

Second, He has appointed you! In Ephesians 2:10 it says, “For we are His workmanship, created in Christ Jesus for good works, which God prepared beforehand, so that we should walk in them.”

As Christians, we have work to do. God has called us to something great, something that gives all glory to God the Father, and we get to be a part of that.

Lastly, God equips us! He gives us His Holy Spirit. When Jesus ascended, He said He would be with us always. As a Spirit-filled believer, you are equipped. Sometimes that looks like having to be trained over a series of weeks, months or even years, but the timing of the Lord is always perfect. I knew when I was 11 that I wanted to be a missionary. However, it wasn’t until I was 21 that I knew the Lord was calling me to evangelism.

I remember it clearly; it was June 25, 2015. I had just finished my junior year in college, I was spending the summer in Haiti and I had no idea what I was going to do with my life. That night, I wrote in my journal about a vision I had while talking to one of the girls I disciple. In it I was walking with two men, Loubens, a man who worked for LiveBeyond and the other unfamiliar, around a bend in the road. All I knew was that our purpose was to share the gospel with vodou priests.

Sure enough, a few days later there I was walking around the bend in the road with Louben and the other man I saw in my vision. His name was Pastor Sargesse, and at the time, he had just started working for LiveBeyond. Every day as we would set out to talk to the vodou priest, we would constantly get stopped by people wanting to hear the gospel. Over a six-week period, more than 150 people were baptized, and we conducted four marriages. It became abundantly clear that evangelism was God’s calling over my life.

It was incredible, and as I said, life-changing, but it took years to build up to that. I experienced an agonizing two years of waiting on the Lord before He started to train me in sharing the gospel. And even after I knew my calling, I had to wait over a year before I finally moved to Haiti. The whole time, the Lord was preparing, equipping and refining in such a way that would bring Him the most glory, and He is still working on me.

If you feel as though the Lord has called you to missions but don’t see any doors opening, then take this opportunity to go before the Father and ask Him what you can learn, be refined in and be challenged in that will bring Him the most glory. Please don’t listen to the lie that you are not good enough, don’t have the right gifts or aren’t holy enough to be a missionary. If the Lord has put missions on your heart, trust Him in His timing and be willing to be refined and prepared. I’ll be the first to say: Missions is a challenge and a sacrifice, but working alongside the Lord in the capacity He created me for has been such a joy and a privilege.

Jacklyn Vanderpool is the trip coordinator and spiritual life program coordinator for LiveBeyond, a non-profit humanitarian organization founded by David & Laurie Vanderpool in 2005 dedicated to providing clean water, medical care and adequate nutrition to the poorest of the poor. To learn more about how LiveBeyond is transforming lives in Thomazeau, Haiti,

The NICL is one of the top leadership training programs in the U.S. taught by Dr. Mark Rutland. If you’re the type of leader that likes to have total control over every aspect of your ministry and your future success, the NICL is right for you!

FREE NICL MINI-COURSE – Enroll for 3-hours of training from Dr. Rutland’s full leadership course. Experience the NICL and decide if this training is right for you and your team.

Do you feel stuck? Do you feel like you’re not growing? Do you need help from an expert in leadership? There is no other leadership training like the NICL. Gain the leadership skills and confidence you need to lead your church, business or ministry. Get ready to accomplish all of your God-given dreams. CLICK HERE for NICL training dates and details.

The NICL Online is an option for any leader with time or schedule constraints. It’s also for leaders who want to expedite their training to receive advanced standing for Master Level credit hours. Work through Dr. Rutland’s full training from the comfort of your home or ministry at your pace. Learn more about NICL Online.