With a mission to transform
NOWHERE PERHAPS is the contrast between light and darkness so evident as in the tiny island country of Haiti.

When David Vanderpool, M.D., (’82) arrived on  Jan. 14, 2010, Haiti had just experienced a 7.0 magnitude earthquake that left the country enveloped in a literal darkness – no electricity for lights, no running water,  an estimated 200,000 Haitians dead, and more than  1.5 million left homeless.

Though the physical darkness was easy to see, the surgeon from Brentwood, Tennessee, 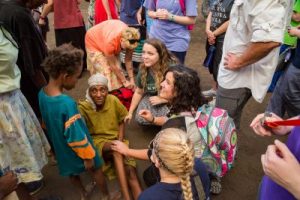 also encountered a spiritual darkness, one fueled by extreme poverty, unrelenting oppression and a voodoo tradition deeply ingrained in the Haitian culture.

David and his two sons, John Mark and David  Stallings (’10), were among the first to respond, arriving two days after the earthquake. The elder Vanderpool  was soon joined by his wife, Laurie (Stallings ’81), and daughter, Jacklyn. From a base on the Dominican Republic-Haiti border, they began providing medical care that ranged from emergency amputations to treating wounds to administering antibiotics  and vaccinations.

David and Laurie were no strangers to medical missions. They had started doing volunteer medical work 22 years ago, providing care in third-world countries suffering from  disasters, whether natural or man-made. In 2005, they founded a non-profit called Mobile Medical Disaster Relief, which they later rebranded as LiveBeyond.

But their 2010 trip to Haiti was a  game-changer. They decided to sell their house, most of their possessions and David’s private medical practice, and in May 2013, they moved to  Haiti full time.

They now live on a 63-acre compound near Thomazeau, built on land they purchased from a voodoo priest.  There they run a medical clinic and school, and operate programs to provide maternal health care, clean water, food, education and jobs, all while sharing the gospel of Jesus Christ.

FAST FACTS: LiveBeyond’s maternal health care program provides care, education and meals for 350 women per year. The organization employs 100 Haitians full-time and provides clean water to 200,000 people. LiveBeyond also supports a school for 250 children and operates a children’s nutrition and education program called Kè Pou Timoun with more than 100 participants. It is building a hospital, a new school and Johnny’s House, a facility to provide care for the mentally and physically handicapped.

Hundreds of volunteers each year, most from the United States, spend a week at a time at the LiveBeyond compound, providing additional manpower and expertise.

What the Vanderpools brought to Haiti in January 2010 and in the seven years since was a sliver of light that has continued to penetrate the mountainous village where they now make their home.

The analogy of light and darkness is one that appeals  to Laurie, or “Mama Laurie” as she is often referred to  by her Haitian neighbors. “Light pierces the darkness;  the darkness never pierces the light,” she said.

When the Vanderpools first moved to Thomazeau,  the villagers were curious but not welcoming, Laurie said. “I used to walk into a village, and the darkness would show itself in the frowns and crossed arms and stares,” she said. “Now, we see just the opposite. People will run to me and pull me into their homes. We are seeing in a very real way how light pierces the darkness.”

transformed  by the experience as the Haitians they came to help.

That, many of them say, is why they feel the pull  to return again and again. 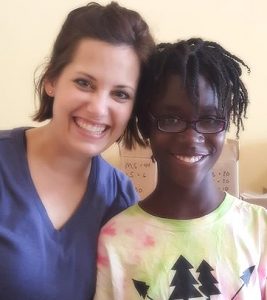 tara-bailey-1
Tara Bailey, O.D.Tara (Studer ’05) Bailey, O.D., who has made two trips to LiveBeyond and is planning a third, says one of the most remarkable experiences for returning volunteers is the dramatic change they can see in a relatively short period  of time. The Katy, Texas, optometrist made her first trip  in 2014 and returned two years later.

“I saw progress – lots and lots of progress,” she said.  “I had a newborn baby with a double chin sit down next to me at worship on Sunday. I saw healthier-looking people. I heard that Dr. Vanderpool had not seen a cholera case in  2-1/2 years because they have clean water. The fact they can now meet secondary needs like dental care, eye care and education, instead of only being able to save people from starvation, makes it abundantly clear that the Lord is working mightily in Haiti.”

The transformation is not just physical, Bailey said. “I saw five people added to the Kingdom of God through baptism. I saw God’s children rejoicing and worshipping him with their whole body and soul, celebrating their freedom from Satan and his darkness. I saw people persecuted for their decision to follow Jesus, but standing firm in their faith and not afraid to live next door to a voodoo peristyle.” 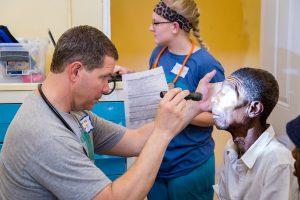 “The change of the physical appearance due to improved nutrition and the nurturing love and education they receive is amazing.”
– Ty Maddox, D.O.
Ty Maddox, D.O., (’92), who practices internal medicine in Irving, Texas, is planning his fourth trip to Haiti in January 2018. He, too, has seen dramatic differences, especially among the children enrolled in the Kè Pou Timoun program, which is Creole for “Heart for Children.”

“The change of the physical appearance due to improved nutrition and the nurturing love and education they receive is amazing,” he said. “One of the economic concepts that is important when considering developing countries is that you get more ‘bang for your buck’ when you focus on children. The children of today will be the leaders of Haiti tomorrow. These future leaders are getting the opportunity to know and love Jesus Christ.”

Opportunities for ACU students
In 2014, ACU’s School of Nursing began taking students on university-sponsored trips to LiveBeyond. The students gain valuable experience working alongside health care professionals, but beyond that they get to see the Vanderpools live out their calling in a tangible way.

“The Vanderpools are very intentional,” said Averi Edwards, a senior nursing major from Edmond, Oklahoma, who has made two trips to Haiti. “Laurie, or Mama Laurie as many call her, is the epitome of kindness. She showers the Kè Pou Timoun children in God’s love to help them realize their worth in Christ.

“Dr. Vanderpool is a mentor and leader in the community,” she said. “Working with him in the clinic was a privilege, and I was able to have many conversations with him throughout my time in Haiti. He is passionate about protecting and providing for the poor. He works hard to bring justice and love to Haiti.”

“They are truly a light in the darkness, and through them so many have come to know what it means to be loved completely and wholly unconditionally. They’ve come to know God.”
– Dr. Phil Schubert
The Vanderpools are quick to give God the glory for the changes taking place, and the volunteers who work alongside them do as well. “They have done so much in such a short amount of time, simply because they are filled with the Spirit and they allow Him to work through them,” Bailey said.

Haiti still carries the distinction of being the poorest nation in the Western Hemisphere. Voodoo priests and many of their followers still stand stony-faced with arms folded as the LiveBeyond crew travels through the villages. But an increasing number of Haitians, young and old, have been won over by the love they see in the entire Vanderpool clan.

As ACU president Dr. Phil Schubert (’91) said in presenting the Vanderpools with the university’s 2017 Outstanding Alumni of the Year award in February, “They are truly a light in the darkness, and through them so many have come to know what it means to be loved completely and wholly unconditionally. They’ve come to know God.”

Maddox agrees. “When I look at the Vanderpools, I see two people who are truly living out what Jesus has commanded us to do. In Matthew 28:19, Jesus told his disciples to ‘go and make disciples of all the nations, baptizing them in the name of the Father and of the Son and of the Holy Spirit.’ This Great Commission is being fulfilled in Thomazeau, Haiti.”

HEARTS LOST TO HAITI: Read about a voodoo priestess who became Laurie Vanderpool’s friend and a pregnant woman whose baby was saved because she made the long trek to the LiveBeyond medical clinic. ACU Today contributing photographer Brandi Jo (Magee ’06) Delony captured the moment on camera.