Texas Strong: Storm Bringing Out the Best in People 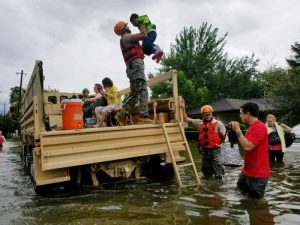 Hurricane Harvey hit Texas where it hurts. At least 70 lives have been lost. Thousands of animals have been separated from their owners. So many homes are now either leveled completely or infested with black mold. Debris piles from clean up teams are almost as high as the water levels have been. There are still some areas experiencing road closures due to prolonged flooding. Devastation is everywhere. Harvey’s sucker punch will be felt for years to come.

But Texas is just a little different than most states. Many Texans didn’t wait for national relief organizations to swoop in and save the day. They quietly hooked up their fishing boats and headed for the coast, ready to help in any way possible. Supplies and volunteers piled up so quickly that the George R. Brown Convention Center in Houston had to turn them away. J.J. Watt isn’t even using the $30 million donated to his foundation; he is still getting so many in-kind donations that are keeping him busy.

It’s as if there is an unspoken rule among Texans that if a brother is in need, we will do what we can to help out. Political background, religion, race, language, age, gender…none of it matters. We will find a way to back each other up. Even our grocery stores get involved in disaster relief. Churches all over Houston have transformed their gymnasiums into relief distribution centers. It’s amazing how organized people can get in such a short amount of time, particularly if it is something they care about.

But it isn’t just Texans. One church received a shipment from New York. Volunteers have come in from Nevada, Mississippi, Oklahoma and Louisiana. The non-profit I work for, LiveBeyond, collected a large shipment of in-kind donations from Tennessee. Even the Haitians and Indians we work with for development work in Thomazeau, Haiti, raised over $1,000 for Houston disaster relief, even as Hurricane Irma loomed off of the Haitian coast. That’s pretty incredible considering that Haiti is the poorest country in the Western Hemisphere. And the outpourings continue.

While these kinds of storms bring out the best in people, it is unfortunate that they also sometimes bring out the worst. We’ve all seen some of the comments on social media about God sending the hurricane to Texas to punish the state for some supposed sin. I don’t think this storm had anything to do with God’s judgment. My friend Bobby’s house didn’t flood because God was judging his sin. It flooded because he was at a low elevation and near the coast. In Matthew 4:25 it says “For He makes his sun rise on the evil and on the good, and sends rain on the just and on the unjust.” But I do think God uses events like this. I’ve never seen more people turn to the church for help. I’ve never seen churches reach out in such an amazing and organized way.

God is using this opportunity to push Christians to further His Kingdom. Churches across America are finally living out the Great Commission! At LiveBeyond, we have this really unique opportunity to connect the Houston area churches we partner with to other churches we work with throughout Texas. The churches near Houston know which families need the most help; churches that were not affected by the storm have people lining up to volunteer. Our job is to coordinate for both receiving and giving churches so that work gets done and people’s lives are changed for the better.

This isn’t a short term project for us; we know Houstonians will need help long after the news cycle ends. We are committed to make these connections between churches and volunteers for as long as it takes to get Southeast Texas back on its feet, ready to take on the next challenge that comes their way.

I don’t think anyone in Texas is trying to pretend that Hurricane Harvey didn’t hurt. The devastation left in its wake has been absolutely horrific. But God is good, and He has a plan. I may not always know what it is, but I do know that He has used this natural disaster to flood Texas with the love of Jesus. And nothing will heal Texas better than that.