On International Day of Persons with Disabilities, here’s a story of a remarkable boy in Haiti 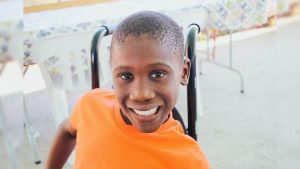 When I first saw Chinyelo, he was covered in dirt and mud, walking on his hands through his village in Haiti. His T-shirt was ripped. He was hungry. He was not well-cared for. He had never been to school. We don’t know exactly why his legs have never worked, but our best guess is that he had some sort of traumatic injury at birth.

I am sharing Chinyelo’s remarkable story now because Sunday is International Day of Persons with Disabilities, created by the United Nations in 1992. It is a day to think about people who don’t get the attention they deserve.

In the culture in Thomazeau, Haiti, Chinyelo is seen as cursed. Because of this he is viewed as worthless. People treat him and others with disabilities poorly, because they believe he doesn’t matter.

One of my other disabled friends in Haiti has been raped repeatedly because it is believed to bring good luck to rape a disabled person before buying a lottery ticket or making a business venture.

When the faith-based organization where I work – LiveBeyond – began humanitarian work in Haiti, we saw the abysmal circumstances of so many disabled people and we couldn’t stand by and do nothing. Especially not with our legacy. 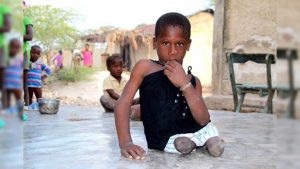 LiveBeyond’s co-founder, Laurie Stallings Vanderpool, had a younger brother – John Mark “Johnny” Stallings – who was born with Down syndrome. At the hospital, his parents – legendary football coach Gene Stallings and his wife, Ruth Ann – were told they should send him off to an asylum.

The Stallings were told that Johnny’s heart condition would not allow him to make it past his first year. These loving parents decided to disregard the doctor’s advice and took him home with the rest of their family.

Johnny Stallings brought light to the Stallings family for 46 years before he passed away in 2008. He was the absolute joy of his family. But his light spread even farther than his family. Coach Stallings took Johnny to football practices and games and became an advocate for those with special needs, particularly those at the RISE Program at the University of Alabama in Tuscaloosa.

Johnny made friends with everyone he met. Faulkner University named its football field after him. The University of Alabama named its equipment room in his honor. He accomplished so much in his lifetime – and his legacy lives on.

We started the Johnny’s Kids program at LiveBeyond to honor Johnny’s memory. We provide physical and occupational therapy, educational opportunities, Bible lessons, nutritional support, sports activities and friendship to the children in the program.

Soon we will break ground on Johnny’s House, a facility for the disabled in Haiti who don’t have a support system. It will be a safe place for them to live, work and learn free of danger.

Thankfully, we are not the only ones who noticed this issue. In Haiti. myLIFEspeaks offers special education classes for 22 children with disabilities and offers physical and occupational therapy to disabled adults and children. The organization also holds a Night to Shine in conjunction with the Tim Tebow Foundation.

Now when I think of Chinyelo, I think of an athletic boy who loves to learn, play and compete with his best friend Pierre Richard, who has a similar condition. I love watching them race wheelchairs, tone their muscles on obstacle courses and play soccer.

They both began attending school this year and are making astronomical progress. They have changed so much in the few years that I’ve known them. These two boys don’t let anything hold them back. We shouldn’t either. They have so much to offer their friends, family, and community, and deserve to be treated with dignity and love.

Devin Vanderpool is the Director of Communications for LiveBeyond, a faith-based humanitarian non-profit specializing in disaster response and focused on transforming the nation of Haiti with sustainable solutions. For more information, visit www.livebeyond.org.