Zombies Are Not Just Horror Fiction: I Know One 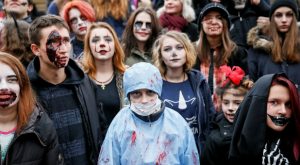 Zombies are a pop-culture phenomenon right now. Pretty much every popular television show out there has an episode about zombies. Millions of Americans are obsessed with Walking Dead. Zombies are a popular Halloween costume. But I just can’t quite bring myself to share in the zombie fascination trend. Why?

Because I know one.

In Haiti, zombies are real. Voodoo priests use at least two different powders to maintain control of their zombies: one to make them appear to “die” and another to assert control over their mental state. A voodoo priest will publicly curse someone and find a way to apply the first powder. It is most often made using tetrodotoxin found in pufferfish. This chemical prevents flexor reactions in the muscles of the victim, meaning they will have a lax facial expression and will hold their arms and legs out straight. Sound familiar? It also results in a lower heartbeat, to the point that the victims appear to die. After about eight hours, the voodoo priest will disinter their victim and use the second powder. It contains ingredients from several plants (one of which is called the “zombie cucumber”) that cause disorientation and a weakened mental state.

The zombie is then used as the voodoo priest sees fit; zombies make very effective hitmen, because they don’t know or care about what they are doing. Similar drugs have been given to homeowners by thieves on several occasions. These homeowners then helped the criminals load up all of their personal belongings without any fuss.

There was a powerful voodoo priest in the area surrounding LiveBeyond’s base by the name of Mondezi. He was considered the top houngan in our area. My fearless sister-in-law, Jacklyn, shared the gospel with him on several occasions. On one such occasion he was very sick. He even allowed Jacklyn and a Haitian pastor named Sargesse to pray for him. They prayed that the evil spirits would leave his peristyle. A few days later, he died, and Jacklyn was credited with his murder. Other voodoo priests ran when they saw her coming, and several even placed a hit on her (which she ignored). Mondezi’s peristyle, the most popular one in the area remained vacant for several months because the priests could not summon any evil spirits there. (Talk about the power of prayer!)

About a month ago, a man came into church looking frantic and scared. His red eyes and funny gait made several staff members think he might be on drugs. Pastor Sargesse spoke with him and soon learned that he wanted to get baptized. This man, Rene, was a voodoo priest who had been the zombie of Mondezi. The red eyes and strange gait were side effects of the drugs that Mondezi had used to control him.

The night before, Rene had had a dream that God told him that he would kill him if he did not begin to follow Jesus. He repented of his sins as a voodoo practitioner on the spot, and was baptized later that day after prayer and counseling. He is now a religious attendee of daily men’s Bible studies and church services at the LiveBeyond base. Even many of the physical side effects he retained from his time as a zombie have lessened over time.

Rene is just one of many victims of zombification. In the Haitian penal code, it is considered murder. But it still happens every day. And it is not a matter to be taken lightly in cultures where it is a tragic by-product of a society without Christian influence.

I’m not saying we shouldn’t dress as zombies at Halloween or enjoy movies based on fictionalized accounts. The Americanized version of zombies as derived from the movie Night of the Living Dead (1968) is definitely escapist entertainment, far from the realities of life where zombies do exist. I am saying that we should be praying for complete healing for those victimized by zombies and for those terrorized by the voodoo priests that use them.

Devin Vanderpool is the Director of Communications for LiveBeyond. To find out how you can partner with LiveBeyond or donate to their relief efforts visit livebeyond.org/waystohelp/.

New Year Discounts On Book Bundles & Gifts: Click Here to view all our bundles and save up to 72%! Prayer, Holy Spirit, Anointing, the Supernatural and more.
Go Deeper with God in a FREE eCourse: Click Here to view all eight of our free courses. Topics include Fear, Forgiveness, Holy Spirit, Supernatural, and How to Hear God.
Anointed Woman Of God: Rise up and enter the anointing of Deborah, Anna, Esther, Ruth and Hannah. You were called to go higher. Click Here to learn more.
Never Stop Praying – Prayer Changes Everything! John Eckhardt’s prayer bundle gives you six powerful books to help you pray and change any situation. Click Here.
New Year – New You – Bible Sale!: Click Here to save up to 50% off a great selection of Bibles. Plus, get a free gift with each order!
Subscription Special: Subscribe to Charisma for two years for Only $29.97 and get two free gifts. Gift #1 The Harbinger. Gift #2 The Harbinger II. Both books are by New York Times Best-Selling author Jonathan Cahn. View Offer